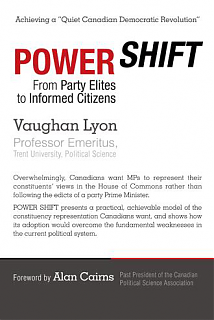 Transitioning to a 21st century model of government

VANCOUVER – Canadians are ready for a change.

According to a recent study, 83% of Canadians want their MP to represent their constituents in the House of Commons rather than following a party’s direction. Further, they think that this change in how they are represented would improve the quality of their government.

His book, Power Shift: from Party Elites to Informed Citizens, outlines how this new system of representation could be achieved and calls on Canadians to demand the political system they want and need. It would allow them to by-pass parties and get popularly supported governments.

Lyon says, “We are in need of a dynamic democratic model that will bring now politically alienated citizens into a close collaborative relationship with ‘their’ government. If this relationship does not exist governments will be forced to manipulate and coerce citizens in order to maintain control and act on controversial issues,” he says.

Prof. Lyon has taught political science and been a political activist for many years. His book not only serves as a call to action for Canadians, but it also provides a detailed, practical and responsible model of the constituency representation they have desired for the last century. This model of 21st century government based on constituency, rather than party representation will give Canadians a properly supported, responsive government.

Lyon is recommending a call to action for a serious change in Canadian government, not simply a call to more research or consideration, as many academic studies have concluded. “But significant, citizen-empowering change will only take place if it is demanded by citizens,” he says.

Power Shift is the start of what Lyon calls a “quiet Canadian democratic revolution” — citizen-inspired change. Canadians are tired of party representation, and Lyon has outlined a strategy to change it in a way that would shift power from parties to informed citizens.

Vaughan Lyon was educated in Winnipeg and Vancouver. After working for a decade in labor relations, he earned his Ph.D. in political science from the University of British Columbia. He then began teaching, researching and writing about Canadian politics at Trent University, where he was named Professor Emeritus of political science. For more information about Vaughan Lyon and his work, visit www.democracynow.ca

Available in hard/softcover and ebook formats